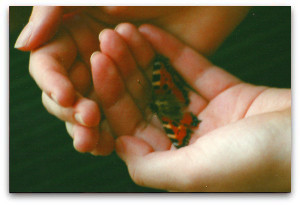 What you are about to hear isn’t typical. I grew up in a satanic cult.
Although I still have hope for my siblings, for my parents I have none. When I escaped from the cult in 2003, there wasn’t much humanity in them left.

All there was left, was hatred, darkness, greed and cruelty. Their whole life was build around the cult activities and the cover-ups they used.

I was born and raised in the cult, offered as a possession to satan.
Neglected, physically, mentally, and sexually abused, tortured. My world was cold and cruel.  Amongst all that darkness, I came to know God’s presence and love.

I was baptized in the cult and in the Dutch Reformed church. Two completely different baptisms. And although they baptized me in the Reformed church just to not be to different and for other matters, some known, others still hidden, they brought me in God’s presence just the same.
I’m very glad they made that mistake.

My parents were leaders of the satanic cult, as was I from the age of 7 until I escaped at the age of 25, located in a city in Holland and in several other places in Holland as well as in Germany , Spain , England , Chicago and Houston , as co-leaders.

For the outside world they were Christians, so on Sunday most of our family went to the Dutch Reformed church, although my mother didn’t go and I wanted to, I longed for God but couldn’t stand to be in a church anymore. For some it was just as hard to get into church.
I was sent to a Christian high school, in which I could hardly function, because now I was raised as a satanist and as Christian although that wasn’t their plan.

As a toddler I came to know God’s voice and presence. He spoke to me when I was in solitary confinement, chained to a wall. He was there with me and spoke comforting words from Psalm 23.
“Though I walk through the valley of the shadow of death, I will fear no evil: for thou art with me; thy rod and thy staff they comfort me.”

I wasn’t able to read a bible, but prayed to God to save me. So I prayed till even that got too hard. On purpose they made praying hard by punish me when I prayed and when I didn’t pray.
They forced me to, for the outside world again read and learn bible verses. When no one was within sight they punished me for believing the scriptures. Till I couldn’t read them anymore.

The Bible was very clear about the fact, that I was doomed if I served satan. The cult daily repeated to me, that I was going to hell, that God wasn’t going to save me.
When I couldn’t pray or read the Bible anymore, my spirit sought God in silence, it screamed for help. I kept trying to reach God.

Why wasn’t He saving me? Was the cult right that I was a child of satan, a horror in His eyes? Was I really the monster they told me I was?
As a two year old I asked God to take my life and call me home. To let me be able to go to heaven. My eyes had seen too much, my spirit couldn’t cope with the abuse I suffered, the people around me that died because of the cult. My daily life was already hell. Hell itself, if I was not granted a place in heaven, wasn’t going to be worse then the one I was living in.. Somehow though I didn’t truly think that God would allow me to go to hell, but my mind was so confused by all the lies, that I didn’t know for sure.

God helped me cope and my mind split into 25 pieces, so that my spirit wouldn’t break. He kept me alive and gave me awareness of His commandments, so I knew that what I was forced to do, was wrong is His eyes.
When people kneeled before me as an idol I felt disgusted. I knew no one should do that unless he kneels for God. This was wrong, I was being worshipped at age 7.
So when they made me an accomplice in their murders and torturing I knew that I didn’t want to do that, but I wasn’t able to say no. I still had times that it was so cruel that I just refused no matter what the consequences were for me.

When at age 7 they made me a priestess I hated every minute I walked on the earth, but again had no choice. I became suicidal but wasn’t allowed to do it, later on God took that tendency away. It took a lot of time to begin to enjoy life.

My only comfort was God and some of the children if they stayed alive long enough. Some of them were Christian and even though they never made it out alive, they still praised God day and night. They even prayed and cared for me.
I escaped in 2003, I chose to live for God and see if He could find it in His heart to have me back.
I left everything and everyone behind. I fled to a city where I didn’t have any contacts at all, left my friends, family, income from social security and therapist. I decided to trust God that He would provide for me.

I was in a wheelchair because of the arthrosis and arthritis, but able to walk when I chose to escape.
I packed my belongings, found a home in two weeks time and moved, was found within 3 days. I begged on the streets for money to eat and pay rent for eight weeks. The government finally got me a social security payment again.

After being stalked, threatened and spied upon by neighbours who admitted to have been paid by the cult to do so, I escaped again to a another city where I lived in several different locations till I wasn’t able to find a room and got homeless.
I lived on the streets for three months in night shelters, day shelters for 1 ½ years and eventually I got my own apartment.

By accident I got involved in the Mormon church, but God kept me from being caught in darkness again and I recognized that this was another cult instead of a church that God was leading.
After a dear friend took me to an evangelical church, and on the journey for a church that did belong to God, I came in contact with them again. This church is now my home church and Idecided to give it a chance.
As God kept calling me I persisted in praying whether or not I succeeded. I could always contact God even without prayer because my spirit would cry out to God and there would be a response.
I joined this church in 2007, went through alpha course, got baptized, went through months of prayer to get my spirit free from bondages in the spiritual world. I got healed from arthritis and arthrosis.

I’ve got my days, that I struggle and need to be reminded of the joy I find in Jesus.
It comes with the package, just as the memories, but Jesus showed me that He cried, when I was hurt and was proud of me, when no one else was.
I felt like an orphan when I was a child.
Now I feel wanted and know that I’m loved by God.
I have meaning in my life and I’m forever grateful, that He made me as I am and kept me safe, as He did.
I now have a loving Father, I never expected to get.
He gave me so much more, then I can ever understand.
I’m healing from the wounds my soul has, and even there God takes care of me. I’m not alone anymore, my road is long and tough, but I’ll make it.
I have forgiven my parents, although they are still doing the things I forgave them for. It doesn’t mean that I ever want to see them again. Too much has passed between us.